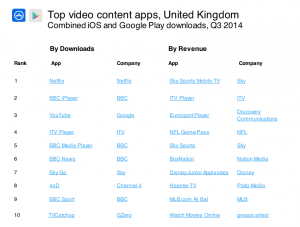 Netflix was the more downloaded video app in the UK in the third quarter of last year, followed by BBC iPlayer and YouTube, according to a report on video apps in the UK, France and Germany by App Annie.

However, the Sky Sports mobile TV app delivered the highest app revenue for video apps, followed by ITV Player and Eurosport Player, according to the report.

In Germany, ProSiebenSat.1’s 7TV app was the most downloaded, followed by RTL Inside and ZDF Mediathek. The highest revenue earners were RTL Now, Zattoo Live TV and Watchever.

In France, 6Play was the most downloaded video app, followed by YouTube and MyTF1, with Canalplay, EurosportPlayer and Digital Virgo’s PlayVOD delivering the heist revenues.

The report’s authors noted that RTL in Germany secured strong revenues by offering free content for a 30 day trial and then requiring subscription or one-off payments, a similar model that that adopted in the UK.