Amazon Fire TV goes on sale in the UK 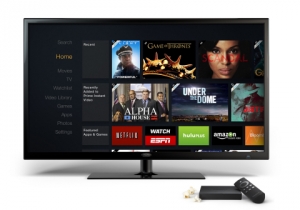 Amazon has started shipping its Fire TV internet streaming box to customers in the UK today, priced at £79.

“Fire TV is a great piece of technology and we are delighted to have been invited by Amazon to form part of the UK launch. This demonstrates TVPlayer’s commitment to making its popular content available to new audiences and users across multiple platforms,” said Lewis Arthur, platform manager of TVPlayer.

Alistair Brown, chief technology and platforms officer at STV said: “This latest launch enhances our multi-platform presence and gives our consumers greater access to our content, meaning viewers in Scotland can continue to watch their favourite STV and STV Glasgow programmes free of charge, anytime and anywhere they choose to.”

Amazon first announced it was launching Amazon Fire TV in Europe back in September – starting in Germany on September 25 and rolling out in the UK on October 23.

Fire TV streams in up to full-HD 1080p, has voice search with a built-in microphone in the remote control and also lets users play games such as Minecraft.

Amazon claims the device’s quad-core processor gives it three times the processing power of Apple TV, and its 2GB of memory means that it has four times the memory of Apple TV or Google’s Chromecast.