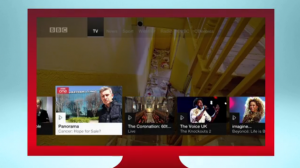 The BBC has launched a version of its Connected Red Button service on a range of Samsung and Sony smart TVs, with plans to roll out to LG TVs early this year.

The BBC said that the service lets viewers get “closer to the action” at sport and music events, with more streams, clips and content from events like the Glastonbury music festival and the Wimbledon tennis tournament.

The corporation also said that it plans to add more features to the service in the future, including lottery results and weather forecasts, with more smart TV platforms due to be added.

“Since the launch of Connected Red Button in 2012, the BBC has brought audiences more of the content they love on their TV – by simply pressing red. We’re thrilled to extend this to even more viewers – and look forward to adding more features and functionality in 2014 – which promises to be another an epic year of live events from the BBC,” said Roux Joubert, general manager, products and on demand at the BBC.