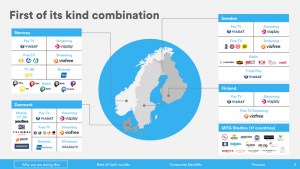 Announced yesterday, the deal will establish a fully converged provider of media and communications services with a footprint that extends across Norway, Denmark, Sweden and Finland.

The agreement marries TDC’s direct-to-consumer offering in mobile, broadband and TV services with MTG Nordics’ production studio, content rights, TV stations and streaming services, and will give a common parent to well-known regional brands like YouSee, Get, Viasat, TV3 and Viaplay.

In a press conference to discuss the tie-up, TDC Group president and CEO Pernille Erenbjerg and MTG executive vice president Anders Jensen – who will become deputy group CEO of the merged company – stressed that with scale comes consumer choice.

They also said that the deal will allow the combined TDC and MTG to compete more effectively in a world where global web giants like Google, Facebook and Apple increasingly call the shots.

“We believe that the opportunity to bring a single source of content and communication – a one-stop shop if you will – is something that is in high demand if it’s tailored in the right way. It will allow customers to actually get a lot more flexibility compared to the current propositions,” said Jensen.

By offering consumers more choices and a broader suite of services he said they will be able to get more personalised and flexible offerings. Exclusivity and locking people in to a service is not the aim off the game, he claimed.

“We want to have an open platform offering; this is extremely important,” said Jensen. “We believe that we will need to be as open as possible to generate as much interest as possible from as many as possible. That includes providing services from our natural competitors like the Netflixes of the world.”

“Combined with superior access services of your choice as a consumer – both on mobile and on broadband – you will be able to consume those services seamlessly across all platforms. You don’t have to care about whether you’re on your mobile or whether you’re on your broadband. You use the device of your preference and then you’re off. This is very, very important.”

As a multiplay provider of connectivity, content and streaming services the enlarged TDC will be in a strong position to deal with changing consumer habits. After the deal closes the combined TDC and MTG will have 2.8 million TV subscribers, 3.1 million voice subscribers, 2.1 million streaming subscribers and 1.5 million broadband subscribers. In all it claims it will have the ability to reach all 10 million Nordic households on high quality networks.

“We do believe that the future entertainment product will be less tied to the TV boxes and the solutions we’re talking about today,” said Erenbjerg, describing TDC’s future vision of a “premium app-based service” that will vary by market and product. A large IPTV subscriber base will also allow for much more personalisation of the customer and the entertainment experience.

Jensen said the set-top box will continue to play an important role, if the consumer wants it to. “But when we go app-based, when we go OTT-based, it doesn’t necessarily have to be part of your proposition,” he said, describing the “mobile video revolution” as being extremely important to the deal.

In terms of scale, Erenbjerg said that combining TDC and MTG and establishing it as the largest investor in content in the Nordic market will help it to safeguard local programming.

“It is not a given that five years from now there will be as much high quality local content as we see today. We see part of our role and part of our responsibility [is] to make sure that that will in fact be the case,” she said. “The changing landscape globally has a very real impact on the need for scale also in a local context.”

Speaking of changing landscapes, it is worth noting that after the deal closes MTG as a company will be unrecognisable from what it was even just a year ago. In fact it will almost cease to exist as a TV company at all and will essentially be MTGx – a digital business that owns multichannel network, eSports and gaming assets.

The TDC deal is the latest in a long line of traditional media divestments for MTG as it has bulked up its MTGx arm by investing in companies like browser-based games firm InnoGames and US games publisher and developer Kongregate.

Earlier this year MTG agreed to sell its 75% stake in youth broadcaster Trace in a deal that valued 100% of the business at €40 million. Last year is also sold its Czech TV assets for €116 million and its Baltic broadcasting business for €100 million. The only TV asset it will be left with is Bulgaria’s Nova Group, which if its past form is anything to go by, will soon also be on the block.

“What we’re doing now is we’re taking MTG as it is today and basically splitting it into two parts,” said Jensen. “One part is the Nordic Entertainment business together with Studios that creates this new fantastic entity. MTG on the venture side – with eSports and gaming – is the new MTG post-the closing of this transaction.”