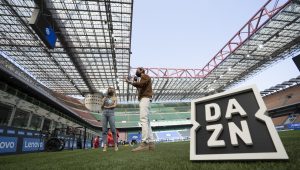 Less than a year after it confirmed that it was exploring a sale, BT is reportedly approaching a deal to sell off its sports broadcaster, BT Sport, to DAZN for an estimated US$800 million.

For BT, the funds would go towards building out its rapidly expanding fibre network across the UK as it faces the double-headed challenge of Virgin Media-O2. DAZN meanwhile would be buying a major portfolio of rights including the English Premier League and UEFA Champions League, immediately establishing it as a major player in the UK’s sports broadcasting space.

Negotiations between the parties first emerged in late 2021, but talks cooled and Discovery made an attempt to sweep in. This week’s news solidifies that if anyone is to takeover BT Sport, it will more than likely be the billionaire-backed DAZN.

While a deal is by no means certain at this point, the acquisition of BT Sport by DAZN would accommodate the desires of both parties and radically shake up the UK’s sports broadcasting market.

With BT now focused on fibre and having an agreement to offer its pay TV customers Sky channels, the sports business seems to have served its purpose for the operator, suggests Omdia senior research manager Tim Westcott

“One reason BT got into live sports in the first place was because it was already in pay TV in the UK but it wasn’t getting anywhere when it wanted a wholesale deal with Sky,” Westcott says. “It wanted the ability to offer Sky Sports to its customers, but now that it has that it seems that it is eyeing an exit.”

The analyst also notes that management changes at the operator in recent years will also have resulted in shifted business priorities for BT, with sports no longer viewed as an essential asset for growth.

“It was always going to be a possibility that new management and shareholders would say that all the money being spent on sports should be put into building out and improving our network,” Westcott adds.

BT is still the UK’s leading broadband provider with over nine million customers, but a small fraction of that are premises connected to the fibre network. BT gave up its search for an Openreach expansion joint-venture partner in late 2021, with CEO Phillip Jansen saying that “We can afford to fund it ourselves,” due to its £1 billion cost-cutting exercise but an extra half-a-billion pounds wouldn’t go wanting when it comes to rapidly expanding this network.

A brave new market for DAZN

While the path forward seems clear for BT, there are more questions over what the future holds for DAZN as it is thrust into the UK sports spotlight.

While the sports streamer expanded to 200 markets including the UK in December 2020, the service has largely flown under the radar in its home country save for its subscriber base of boxing enthusiasts.

The acquisition of BT Sport will immediately put DAZN into the mainstream consciousness as a household name, even if it retains some elements of BT Sport’s current look and feel including its Olympic Park studios.

DAZN will appreciate the pre-existing subscriber base, but Omdia’s Westcott believes that the company will be focused on establishing its own branding while it evaluates BT’s rights portfolio.

“I’m sure it will be DAZN,” the analyst asserts. “DAZN is a global brand that calls itself the ‘Netflix of sport’. I don’t think it will want to have a different brand in what will become one of its main markets.”

Suffice to say that it should not be a surprise if key elements of BT Sport are retired, such as its branding and potentially even the standalone BT Sport for smartphones and CTVs.

Westcott outlines that DAZN is purely viewing BT Sport as an opportunity to acquire key rights in the market, without facing the risk of having to simultaneously launch a new brand.

DAZN will learn from the experiences of other players in the UK who made plays for major rights, but couldn’t establish a subscriber base to justify the cost. The most notable example of this was Eleven Sports’ short-lived foray into the UK market – a move subsequently branded a ‘mistake’ by founder and chairman Andrea Radrizzani.

Sky and Virgin – the latter of which Westcott says constitutes the biggest subscriber base of BT Sport customers – will also have a say in the sale due to existing wholesale agreements with BT. These carriage arrangements are, Westcott says, “potentially the big stumbling blocks”.

The analyst however suggests that these parties may prefer to do business with DAZN as they are “no longer buying a pay TV service from a competitor”.

But while the nature of this carriage relationship may be more frictionless, all eyes will be on DAZN when it comes to the next major rights sale. The Premier League rolled-over its deals with Sky, BT and Amazon for the next cycle last year, while BT retained the Champions League rights until 2024 in a £1.2 billion 2019 deal.

DAZN’s expansion into Germany and Italy has seen it supersede Sky as the respective countries’ primary domestic football rights holder, though Westcott thinks that it may be more cautious in the UK.

“The DAZN project has soaked up enormous amounts of cash, and we still haven’t seen its 2020 accounts yet,” Westcott says. “It’s almost certainly still running at a loss and most investors will want a return on their investment at some point.”

The analyst points out that DAZN has seldom paid over-the-odds for rights, and has instead offered rights owners the reserve price – as was the case in Italy. He predicts that DAZN will remain “a strong number two” to Sky, but also points out that Amazon “is prepared to invest in premium tier 1 sports and may go further and buy more rights.”

Ultimately, Westcott thinks that DAZN “won’t want to replace Sky as the number one sports player, but it will still be interested in premium sports like the Premier League.”

With the sale of BT Sport looking likely to close sooner rather than later, the already competitive UK sports broadcasting market is set for a major cash injection that will undoubtedly be a fascinating story to follow in the coming months and years.