The top four streaming players accounting for the lion’s share of growth among the top 100 audiovisual players in Europe between 2016-20, according to a new report on media ownership from the European Audiovisual Observatory. 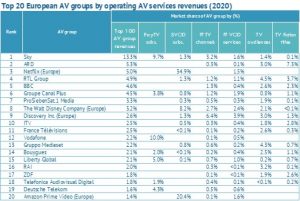 The combined audiovisual services revenues of the top 100 audiovisual companies in Europe grew by 7.7% from 2016 to the end of 2020, slightly more than average inflation and the overall market, according to the report, Top Players in the European Audiovisual Industry.

The growth was driven solely by commercial players, up 12%, with over 75% of the incremental revenues delivered by pure SVOD players Netflix, Amazon and DAZN alone. , By contrast, the revenues of traditional players have stagnated, with businesses relying on advertising being more severely affected and PSBs weight dropping by 3% over the five-year period, down to 31% in 2020.

The report found that the top 20 players accounting for around 70% of the operating revenues of the top 100, which the authors said showed less concentration than in the US market.

With the top four OTT platforms controlling over 70% of subscriptions, SVOD stands out as the most concentrated audiovisual market segment in Europe, followed by pay TV with 72% of subscriptions accounted for by the top 20 pay TV operators.

Commercial player RTL, with €6 billion, and the UK’s BBC, with €5.7 billion, rounded off the top five.