The TV business in the Middle East and North Africa region faces big changes over the course of next year as satellite pay TV operators switch to offering OTT services to take on cord cutting, sports rights holders move to selling rights on a country-by-country basis and OTT providers start to invest significant amounts in local content, according to a report by DTVE sister research outfit Omdia. 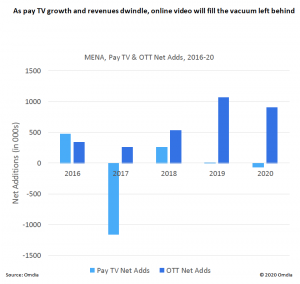 Satellite operators in Middle East & North Africa (MENA) are planning to switch to OTT for a number of reasons, according to the report, 2021 Trends to Watch: Pay TV & Online Video markets in MENA.

For pay TV operators in the region, online distribution of content saves capex and operational costs as well as subscriber acquisition costs. It also enables them to expand their subscribers’ base by approaching new audiences, mainly younger demographics who did not previously subscribe to pay TV, according to report author Constantinos Papavassilopoulis, principal analyst, consumer at Omdia.

Dubai-based pay TV operator OSN has already begun to move towards OTT to combat losses in satellite subscribers, in particular since 2018.

According to Papavassilopoulis, owners of premium sports will also start negotiating the selling of their content not for the whole of MENA but on a country-by-country basis, meaning that regional operators such as beIN Media will be unable to obtain exclusive rights for the whole region. Initially, says Papavassilopoulis, this new policy will be applied for the territory of Saudi Arabia and possibly Bahrain. Both Italy’s Serie A and Germany’s Bundesliga have shown that they want to exclude Saudi Arabia from the negotiation of the renewal of rights they both will have with beIN Media.

Piracy has also played a role in changing the landscape and has take a particular toll on beIN Sport, which has suffered from the industrial-scale piracy orchestrated by Saudi-based – and allegedly government-supported – pirate outfit beoutQ as well as from the blockade against Qatar led by the Saudi government.

The other major trend identified by Papavassilopoulis for next year is that investment in Arabic original content by Saudi OTT services will shape the market in MENA.

The OTT market in MENA is currently dominated by Netflix, but competition is expected to emerge from two ambitious Saudi OTT services, Shahid VIP and Jawwy TV.

Omdia expects the combined subscriber bases of the Saudi services to overtake Netflix in 2022 and to lead thereafter.

Both services are backed by strong finances, widely recognised local brands like MBC and STC and by strategic investment in local Arabi original content. Shahid VIP and Jawwy TV have both established a rich network of partnerships with local broadcasters and content producers while they are planning to expand beyond the MENA region targeting the global Arabic diaspora, said Papavassilopoulis.