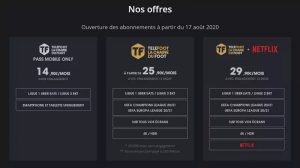 Announced in June, the channel comes as a partnership between Spanish rights agency Mediapro and French broadcaster TF1 and utilises the branding of the iconic soccer show broadcast since 1977.

The mobile only app will cost €14.90 per month and will offer full access to the channel which will carry 80% of the matches in French football’s top tier.

This new offer will represent the lowest entry-point to the channel, with Mediapro offering four different packages.

The others include a rolling €25.90 per month contract which will allow for viewing on live TV, PCs and smart TVs in 4K HDR. This same offer can be paid for as a €269.90 annual one-off payment, representing a saving of roughly €40 per year.

Alternatively, Mediapro has partnered with Netflix for a combined product bundle of Téléfoot and the leading streaming service for €29.90 per month with a one-year commitment. Netflix is typically €11.99 per month, meaning that the mobile-only offer represents a cheaper monthly outlay than the bundle, but this newly revealed product will restrict viewers to only watching on their handheld device.

Regardless, all of this indicates a far more digital-oriented strategy for Ligue 1 than had previously been seen, with Mediapro shaking things up after its shock domestic rights win in 2018.