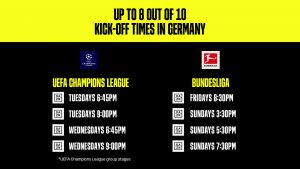 The extent of DAZN’s UEFA Champions League rights buy in Germany has been revealed by the sports streamer.

DAZN and ZDF were revealed to have won the broadcaster tender for the 2021-22 – 2023-24 cycle, but the former will show the vast majority of matches for the first time.

Dubbing itself as the “new home of live football” in Germany, DAZN will stream 121 out of 138 matches from the playoffs to the final. This covers every match, except for one per week and amounts to a little more than 87% of the total matches of the competition.

The final will be shared with a free-to-air broadcaster.

The self-declared home of live football also recently won a rights package to the German Bundesliga, in a deal that will see DAZN stream exclusive coverage of 106 matches per season for four seasons from 2021 across Germany, Austria and Switzerland. This includes two of the three top picks for each Bundesliga match weekend.

John Gleasure, chief business development officer at DAZN, said “Extending our coverage of the UEFA Champions League until 2024, alongside our extensive Bundesliga rights acquisition means DAZN will become the number one destination for football fans in Germany. At the peak, we’ll show exclusive live coverage in Germany at eight out of the 10 kick-off times a week across the two leading club competitions, giving fans affordable access to the most prestigious and exciting football competitions around.”

The move reinforces DAZN’s position in the German-speaking countries as it looks to a realignment strategy towards existing core markets that has come as a result of the coronavirus pandemic.

This realignment has also seen DAZN cut short its Southeast Asian rights deal with UEFA by a year.

DAZN is also amid a beta test of its combat sports-oriented international service which kicked off in late July.

Commenting on the German news, Paolo Pescatore, tech media and telco analyst at PP Foresight, said: “DAZN’s spending spree continues at pace especially in Germany. While offering Bundesliga and European matches provides some long term certainty, the future is uncertain. Despite having deep pockets, it will be hard to replicate this approach in every key market with the hope subscribers sign up. Partnerships with rivals as well as subscriber adoption will be critical to its long term survival.”