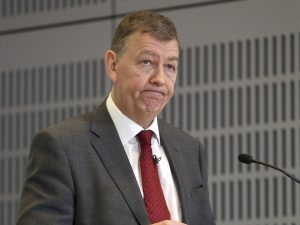 China Global Television Network (CGTN) has rehired a former Ofcom board member amid ongoing pressure on the regulator to revoke the state-owned broadcaster’s UK licence.

Over the past few months, the broadcaster has been found guilty on multiple occasions of breaching impartiality rules and airing forced confessions, and has been forced to register as a foreign agent.

Now in an effort to protect itself from further scrutiny, it has appointed Ofcom’s former content board chairman Nick Pollard in an as-yet unnamed role.

Pollard was previously poached by CGTN from Sky News, where he ran the network for a decade, and was charged with heading up the broadcaster’s newly-opened London office. The exec was hired by CGTN one month after Ofcom opened an investigation over its broadcasting of forced confessions, and would only stay with CGTN for less than a year. His initial resignation was based on concerns over its failure to comply with UK rules on impartiality in regards to its coverage of the Hong Kong protests.

Evidently CGTN has done enough – ethically or economically – to convince Pollard to rejoin. Neither party commented on the appointment, but the FT reports that he has been advising the broadcaster since May.

The UK has been viewed as key to CGTN’s worldwide expansion plans, with London being chosen for its third main office alongside those in Washington and Nairobi. To date, it has hired about 100 journalists to work in London.

While it looks to pick up where it left off with Pollard, CGTN is facing mounting scrutiny from Ofcom, with possible sanctions expected before the end of the year.

The regulator is considering punishments ranging from fines to the withdrawal of its broadcast licence – the latter being endorsed by free speech advocates and politicians.

Peter Dahlin, director of human rights group Safeguard Defenders – which has submitted a complaint to the regulator – said: “The best way forward is to revoke their licence to teach them that this is unacceptable. And then of course they can, according to the rules, reapply for a licence after that and restart the process.”

UK shadow culture secretary Jo Stevens said: “The findings against CGTN are damning and Ofcom have already said they will take action which could go as far as banning the channel from the UK airwaves. Ofcom has an ongoing duty to make sure those that hold a licence to broadcast in this country are fit and proper.

“All too often TV channels run by foreign states, such as Russia Today and the Iranian Press TV, which was banned in 2012, have found themselves unable to abide by the broadcasting code. CGTN and other state-backed broadcasters have a history of flagrantly breaching the Ofcom code. While the regulator can and does impose financial penalties, these are less of a deterrent than for other TV channels. There needs to be a review of whether the current sanction regime is sufficient.”