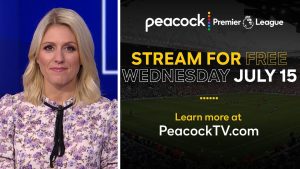 NBCUniversal will broadcast the English Premier League for free to celebrate the launch of its streaming service Peacock.

While primarily being pitched as an entertainment service (as evidenced by the recently announced distribution deal with ViacomCBS), sports was always meant to be a core part of Peacock’s offer – the streamer’s launch was initially meant to coincide with the 2020 Tokyo Olympics.

A somewhat under-promoted feature of Peacock however is its rights to the English Premier League as a part of its US$5 per month tier.

However, to promote the launch of the streamer, NBCUniversal will make all of its EPL coverage available for free on its July 15 launch day, all without commercial interruption.

Matches available for free to viewers in the US will include Arsenal vs Liverpool and Newcastle vs Tottenham.

Rick Cordella, EVP and chief revenue officer at Peacock, said: “Live sports makes Peacock unique among streaming services, and we are excited to present a free sample of matches to Premier League fans across the US.”

In addition to the English Premier League and the Olympics, Peacock will broadcast sports events such as tennis’s US Open, golf’s Ryder Cup and one NFL match per week.

In terms of entertainment content, Peacock’s free tier will offer 7,500 hours of movies and shows while its premium tier will see more than double that.