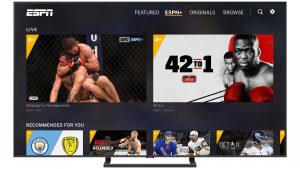 Disney will reportedly up the price of sports streamer ESPN+ to US$5.99.

According to The Verge, which claims to have viewed internal documents, the price increase of a dollar will only impact the monthly subscription while the annual US$49.99 cost will remain unchanged.

Existing monthly subscribers will keep the US$4.99 fee through to August 2021 before being upped. New subscribers from August will pay US$5.99 per month.

The increase of a dollar brings the price of ESPN+ on a par with Hulu’s basic ad-supported tier and closer to the US$6.99 for Disney+.

However, the report noted that the US$12.99 bundle of all three streamers will remain unchanged for the foreseeable future.

ESPN+, which launched in April 2018, has spent the past couple of years quietly building up its rights portfolio to include the likes of the UFC and a nine-year deal for golf’s PGA tour believed to be worth US$680 million. The streamer however lacks the US’s major sports leagues such as the NBA, NFL or MLB.

The timing of this announcement may be a hard pill to swallow for many subscribers, with most sports in the US still yet to resume.

It is however the first price increase seen by a Disney streaming product since the launch of Disney+ in November 2019 and the first major news for the sports streamer since the departure of the company’s D2C boss Kevin Mayer in May.