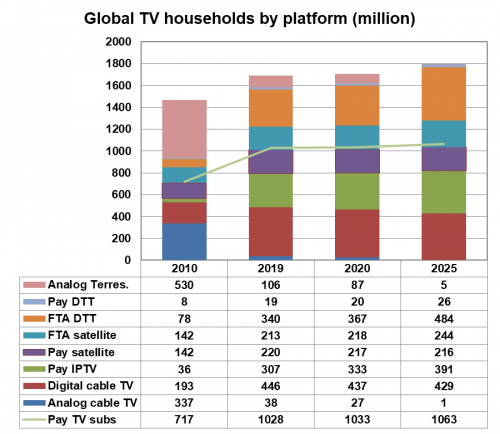 The total number of pay TV subscribers around the world is set to top 1.06 billion by 2025.

According to new figures from Digital TV Research for 138 countries, the industry will see an increase of 35 million additional pay TV subscribers between 2019-25, building on the milestone of 1 billion passed in 2018.

Satellite and cable TV are set to be the losers however. Satellite TV will lose 4 million subscribers between 2019-25, with the segment generating 20% of pay TV subscribers by 2025; down slightly from 21% in 2019.

Somewhat surprisingly, there were 38 million analogue cable TV subscribers by the end of 2019 around the world. Digital cable TV will similarly lose subscribers – falling from 446 million at end-2019 to 429 million by 2025.

Simon Murray, principal analyst at Digital TV Research, said: “Our forecasts are based on the assumption that professional sports will restart in August following relaxations in the Covid 19 lockdown. If this does not happen, then pay TV will experience considerable churn.”