OTT market in Eastern Europe set to triple by 2025 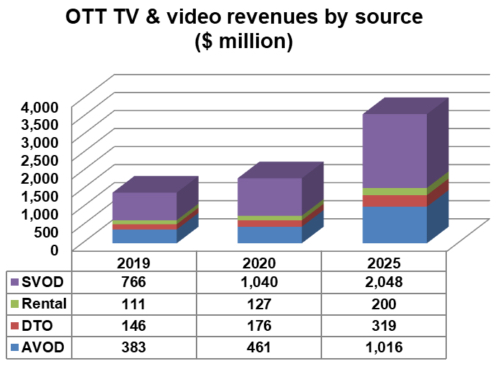 The Eastern European OTT market is set to triple by 2025, claims a new report.

According to new figures from Digital TV Research, OTT TV episode and movie revenues for 22 Eastern European countries will reach US$3.58 billion in 2025. This figure is up by nearly triple 2019’s total of US$1.41 billion.

Russia will be the largest market, but not quite as dominant, with revenues reaching US$610 million (30% of the total) by the mid-point of the decade. Poland will carry 34% of the total (US$687 million), with the duo’s joint share set to fall from 74% in 2019. This, the report says, indicates that the other nations in the region will continue to see growth.

The second largest segment in the market – AVOD – is similarly set to grow from US$383 million in 2019 to US$1.02 billion in 2025. Rentals and download to own (DTO) are both set to grow, but by more modest amounts over the next five years, with neither segment set to exceed US$320 million in value.

Simon Murray, principal analyst at Digital TV Research, said: “Poland will remain the SVOD revenue leader despite having a much smaller population than Russia. Russian operators charge less than their Polish equivalents. Russia has more SVOD subscriptions than Poland.”