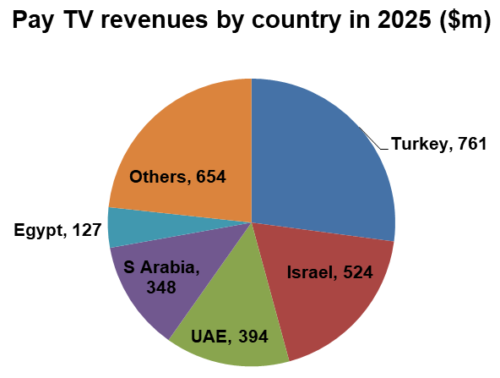 Pay TV revenues in the MENA region are not expected to grow in the immediate future, and actually saw a significant decline to 2019.

According to figures from Digital TV Research, revenues in the 20 MENA countries fell by 12% between 2016-19. This left revenues at just under US$3 billion.

That said, things are expected to improve in the coming years, with revenues reaching  US$1.269 billion, and pay TV subscribers rallying to 4.71 million by 2025.

As per the previous year’s report, the ban of BeIN in Saudi Arabia, which has long been in conflict with BeIN’s home nation of Qatar, has had a detrimental effect.

Simon Murray, principal analyst at Digital TV Research, said: “The ongoing ban on beIN in most Arab-speaking countries is adversely affecting the whole sector. Even when the ban is lifted, we believe that an unofficial ban will remain. As BeIN suffers, it is reducing its expenditure on top events – thus making it less attractive to potential subscribers.”

Elsewhere in the region, Israel is predicted to lose a quarter (24%) of pay TV subscribers to cord cutting between 2015-25, with revenues almost halving in the period from more than US$1 billion in 2015 to US$524 million in 2025.

(Update: Article has been altered to reflect that the ban on BeIN Media is only in Saudi Arabia)