Pay TV revenues have declined in the Middle East and North Africa over the past two years thanks in to piracy, competition from OTT providers, falling revenue per user, and the Saudi-led ban on BeIN Media. 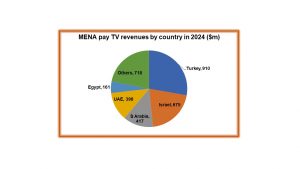 This according to Digital TV Research’s latest ‘Middle East and North Africa Pay TV Forecasts’ report, which said that pay TV revenues for 20 MENA countries declined 11% to just under US$3 billion (€2.6 billion) between 2016 and 2018.

“Pay TV in the MENA region has been hit by a Saudi-led ban on the sale of Qatar-backed BeIN decoders and subscriptions since mid-2017,” said Simon Murray, principal analyst at Digital TV Research.

“The ban has been compounded by BeoutQ, an illegal platform that retransmits some of BeIN’s content especially its exclusive sports rights. The region is no stranger to piracy, but the sophistication of the BeoutQ operation is beyond anything seen before.

“BeIN is fiercely protesting BeoutQ, with the support of major content owners, especially sports federations. We believe that the situation will be resolved in 2019; given the international pressure to drop the ban and to close BeoutQ.”

In November, the BBC and Sky called on the European Commission to take formal action against Saudi Arabia over pirate broadcaster BeoutQ providing illegal access to content including the English Premier League.

Both companies sent letters to Anna Malmström, the EC’s commissioner for trade, adding their voices to calls for a formal EU protest to the Saudi government. It has been alleged that the Saudis are supporting BeoutQ as part of its campaign against neighbouring Qatar.

Last month, the World Trade Organisation agreed to set up a panel to investigate Saudi Arabia’s alleged failure to protect Qatar-based BeIN Media’s intellectual property rights, amid disagreement over whether the WTO could launch a probe in a case that the Saudi government claims to be a matter of national security.