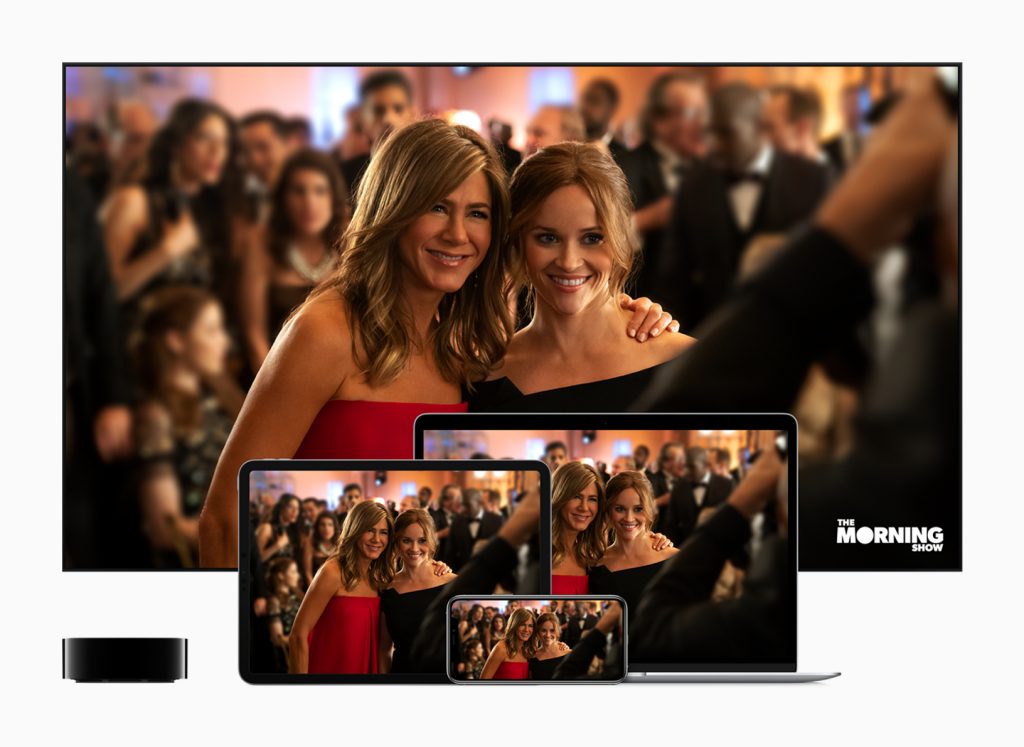 Apple TV+ will launch globally on November 1 with a price point of US$4.99 per month.

Announced at its annual iPhone launch event in Cupertino, Apple also announced that it will offer a free year’s subscription to purchasers of a new iPhone, iPad, Apple TV, iPod Touch or Mac device. Other users will be able to try out the new SVOD with a one week trial.

The streaming platform, which is solely reliant on original content such as The Morning Show, See and For All Mankind, will launch in over 100 countries and regions. Asides from Apple’s proprietary devices, the service will be available on the Apple TV app on newer Samsung smart TVs, with future launches promised for Amazon Fire TV, LG, Roku, Sony and VIZIO platforms. No mention was made of availability on Android or Android TV.

In an attempt to avoid the pitfalls of account sharing that have plagued other streamers, Apple says that users can share a subscription with up to six other Apple users through Family Sharing.

Zack Van Amburg, Apple’s head of Worldwide Video, said: “With Apple TV+, we are presenting all-original stories from the best, brightest and most creative minds, and we know viewers will find their new favorite show or movie on our service.

“Each Apple TV+ original offers its own unique story, fresh perspective and powerful message – all meant to entertain, connect and inspire cultural conversations.”

Jamie Erlicht, Apple’s other head of Worldwide Video added: “Apple TV+ is an unprecedented global video service with an all-original slate. We look forward to giving audiences everywhere the opportunity to enjoy these compelling stories within a rich, personalized experience on all the screens they love.”

The launch of Apple TV+ is the latest step in the company’s attempts to corner the premium services market, and will complement its Apple News+, Apple Arcade, Apple Music, Apple Card and Apple Pay subscriptions.

Paolo Pescatore, media and telco analyst at PP Foresight Tech, agreed that this is the next chapter of Apple’s evolution: “The story is all about services. This represents another landmark moment for Apple with more airtime dedicated to services. Furthermore, it is the right time for Apple to be joining the services party.

“Apple recognises the growing importance of services to its future growth. Now is a pivotal time for the company as it executes on its grandeur plan for services. On services, this is a huge statement of intent. Immediate global rollout at a punchy price point outlines Apple’s commitment to compete head on with rivals.”

Pescatore concluded: “These services represent a great add on to Apple iPhone users. It is all about adding value and providing users with the best service experience across devices. Apple is in a unique position to achieve this. Apple needs to retain users, drive engagement and seek to gain new users with its unique service offerings. It must seek to leverage its scale and distribution to promote awareness and generate subscriber uptake for all its new services.”