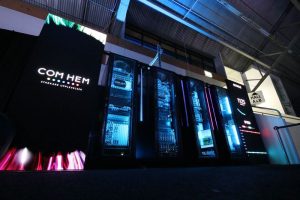 The record is based on Com Hem’s ability to supply a broadband connection of 1.6Tbps during the DreamHack Summer eSports event in Jönköping last summer. Guinness World Records established that this was the fastest internet connection ever used simultaneously by a larger group of people in the world.

Com Hem supplied the connection over the same fibre network that delivered internet connections to the operator’s 700,000 homes in Sweden.

Com Hem said that 1.6Tbps was the equivalent of approximately 5.3 million people streaming music at the highest audio quality at the same time, or around 230,000 people simultaneously watching Netflix in HD quality.

The connection was set up between Stockholm and Jönköping, a distance of 300km., enabled by using DWDM technology, which increases the capacity of fibre cables by sending multiple signals in parallel through the same cable.

“Our world record in broadband connection is made possible thanks to the constant investments we make in our nationwide network, which is used to deliver broadband to our customers. It is important that we, as one of Sweden’s largest broadband providers, have a stable and fast network, and the fact that Guinness World Records acknowledges this record proves that we offer our customers world-class connectivity. An important milestone in Com Hem’s history made possible by our fantastic employees,” said Thomas Helbo, EVP, technology fixed at Tele2, Com Hem’s parent company.