Facebook-owned Oculus has unveiled Oculus Quest, a virtual reality headset that it is billing as its first all-in-one VR gaming system. 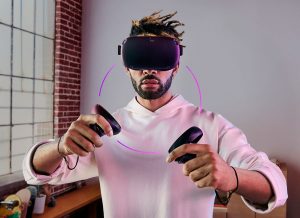 Oculus Quest, which was called Santa Cruz during its development phase, will offer six degrees of freedom and touch controllers – with no PC, wires or external sensors required.

The device was unveiled at the Oculus Connect 5 (OC5) conference in San Jose, California, and is due to launch in spring 2019, priced at US$399, with a slated line-up of 50 launch titles.

Quest will have built-in audio and a display resolution of 1600×1440 per eye, using the same optics as the Oculus Go – the lower-price mobile VR headset that Facebook launched in May.

“We’re excited to usher in the next era of VR gaming with the introduction of Oculus Quest,” said Oculus in a blog post announcing the launch.

“With the introduction of Oculus Quest, we’ve completed our first generation of best-in-class VR headsets. Oculus Go remains the easiest and most affordable way to get into VR, while Oculus Rift leverages the power of your PC to push the limits of what’s possible.”

“Thanks to Oculus Quest, we’re now able to combine the best of both worlds and welcome even more people into the VR community.”