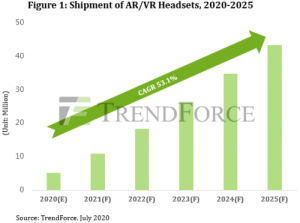 Much of the hype around virtual and augmented reality (VR/AR) may have cooled off in recent times, but advancements to technology and the release of glasses-like devices is predicted to lead to far greater sales and adoption.

A key reason for this growth will be aggressive product strategies from branded manufacturers, with high-profile companies such as Apple, Huawei and Samsung expected to release glasses-like devices in the next two years.

As a result, TrendForce said that the AR/VR market will see rapid expansion in 2021 and 2022 as various brands begin participating in AR/VR development. This, it said, will also lead to the development of related key components, such as optical components and Si-OLED displays.

This shift towards devices which resemble traditional glasses rather than the bulky headsets which have come to define the current generation of VR and AR products is also identified by the researcher as a contributing factor towards rising adoption. These more slimline products are more lightweight and have their computing units and batteries kept in separate housings.

The fact that the smaller AR/VR glasses will contain only several key components is expected to make them more firmly established as smartphone peripherals like smart watches, and this is likely to drive smartphone brands towards establishing themselves in the market.