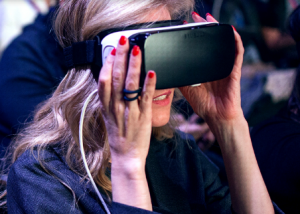 Sky has launched its latest VR experience, a tie-in to new Sky One drama A Discovery of Witches.

Speaking at IBC today, the technical director of Sky VR Studios, Richard Mills, said that drama and entertainment is something that Sky VR is exploring – alongside sports, documentary and news.

The A Discovery of Witches VR experience allows the user to be embodied as one of the main characters of the show, letting them experience the virtual world from the perspective of either a vampire or a demon.

Discussing recent developments in the VR space, Mills said, “The biggest advance in my opinion is not the hardware, it’s actually the creative side.

“Now after research, after trying things, after an iterative process, and after really drilling down into the creative side of things we have an understanding of the medium and we have ideas as to how it should work.”

On the technology side, Mills pointed to the latest advances in haptics as “absolutely fascinating” and namechecked small UK startup Ultrahaptics, which is working on technology that allows users to feel touch sensations in mid-air via the transmission of ultrasonics, without the need for haptic suits or gloves.

Sky was the first UK broadcaster to make a move into VR after launching Sky VR in October 2016. The company offers a mixture of third-party content and specially commissioned experiences.