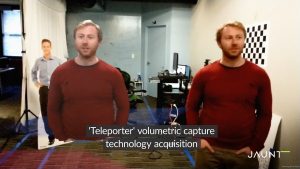 The Teleporter software system is designed to capture, processes and stream life-like augmented reality (AR) assets in real-time, and the acquisition establishes a new Chicago office for Jaunt.

The deal will support Jaunt’s recently announced volumetric research and development initiatives for the Jaunt XR Platform – a business-to-business solution that enables partners to distribute augmented, virtual, and mixed reality assets through their own applications and channels.

“The addition of Personify’s Teleporter team and technology allows us to increase the speed and scope of our research and development as we move further into the extended reality arena with the Jaunt XR Platform at the core of our business,” said Arthur van Hoff, Jaunt CTO and founder.

“We’re honing in on fully immersive virtual, mixed, and augmented reality experiences, and are thrilled to advance those technologies with the help of our new Chicago-based team.”

“Jaunt has an incredible reputation and the company’s smart approach to business has made them a primary player in the XR space. We’re excited to join forces and continue advancing the business to deliver new solutions for XR content creation and distribution,” said Venshtain.

The company is headquartered in San Mateo, California and has offices in London, New York and Shanghai. It has a number of prominent backers that also include Google Ventures, Axel Springer, Highland Capital Partners and Redpoint Ventures.

Personify was founded by researchers from University of Illinois at Urbana-Champaign and has been working in the field of immersive video since 2010.