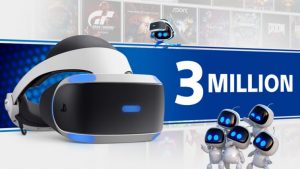 Sony announced the milestone figure along with the news that it has also sold 21.9 million PS VR games and experiences.

“We’d like to thank all our fans for the amazing support, and we’re thrilled that so many of our gamers have experienced the magic of VR and stepped into the captivating worlds that electrify our senses,” said May Yee, vice of PlayStation marketing in a company blog post.

Sony said that there is now a “robust catalogue” of nearly 340 PS VR games and experiences available worldwide, with forthcoming releases for later in 2018 including Astro Bot Rescue Mission and Firewall Zero Hour.

Digi-Capital, a Silicon Valley-based consulting firm focused on VR and AR, said that Sony is “the clear market leader in the premium/standalone VR platform sector over its HTC Vive and Oculus Rift competitors.”

Sony previously reported that it had sold two million units of its PlayStation VR headset as of December 3, 2017, thanks to strong momentum for its PlayStation 4 console.