CuriosityStream, the SVOD service launched by Discovery founder John Hendricks, has relaunched its service by moving to a hybrid advertising- and subscription-supported model. 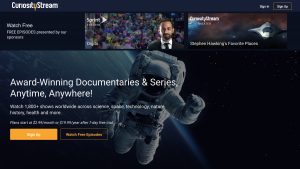 The company has launched a new ad-supported tier, called CuriosityStream Showcase, that gives users around the world access to 18-titles for free.

The company has also lowered the price of its subscription packages and introduced pre-roll ads into its ‘standard’ package, which is now available for US$2.99 per-month or US$19.99 per-year.

The company hailed the move as a “paradigm shift” in the economic model of delivering premium on-demand television and stressed that sponsored messages will be limited to 15-second pre-roll ads, offering an uncluttered ad environment.

At the same time the company said that CuriosityStream Showcase will be available for carriage, without wholesale cost, by CuriosityStream’s SVOD distribution affiliates – which include cable operators, satellite TV providers, and ‘skinny bundle’ OTT distributors.

CuriosityStream now has deals in place with more than 30 third-party distributors – including Amazon Prime Video Channels,Sling TV, Samsung, TiVo, StarHub, VRV, Roku and YouTube TV – and said that its paying subscriber count is approaching the one million mark.

“Today marks the launch of a new and vibrant economic model for on-demand television toward which viewers are migrating by the tens of millions in the United States and by the hundreds of millions globally,” said John Hendricks, founder and executive chairman of CuriosityStream.

“Financial support by our six sponsors allows us to make CuriosityStream ‘priced for the planet’ with HD delivery now available for just US$19.99 per year. For the price of what we all used to pay for a single show on a DVD, US$19.99, we can now deliver over 1,800 on-demand CuriosityStream titles in stunning high-definition resolution for a full year.”

CuriosityStream’s new ad-based model will be supported by six ‘category-exclusive presenting sponsors’. Sponsor categories are due to include automotive, aerospace, energy, communications, insurance, and financial services, with Sprint the first brand to come on-board.

The changes at CuriosityStream were accompanied by the publication of a nine-page industry analysis paper by John Hendrick titled ‘Undeniable and Unstoppable’ in which he projects that the global “streaming-capable consumer universe” will grow from one billion today to two billion within 10 years and three billion within 20 years.

CuriosityStream president and CEO, Clint Stinchcomb, said: “Our streaming service, which offers premium programs across the entire category of factual entertainment, is riding the unstoppable wave of internet-delivered SVOD television that is sweeping the planet.”