Apple announced a number of Apple TV updates and a partnership to supply the device to US cable operator Charter Communications at its Worldwide Developers Conference (WWDC) yesterday. 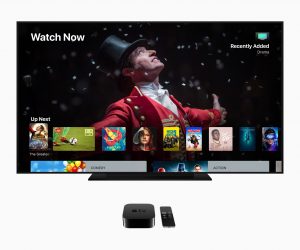 Apple used the event to preview tvOS 12, the latest version of the Apple TV operating system. This will support Dolby Atmos, making Apple TV 4K the only streaming player to be both Dolby Vision and Dolby Atmos certified.

tvOS 12 will also include a new simplified authentication process for video apps called ‘zero sign-on’, which will allow Apple TV to detect a user’s broadband network and automatically sign them in to all the supported apps they receive through their subscription.

Zero sign-on will begin with Charter later this year, with the number two US cable provider announced at WWDC 18 as the latest operator to begin offering Apple TV 4K to its customers.

From later this year, Charter customers will have access to live channels and on-demand programs via a new Spectrum TV app on their Apple TV 4K, iPhone and iPad. This will be integrated with Siri and the Apple TV App.

Charter joins a number of other operators that have started to offer Apple TV 4K devices to customers along with their services, including AT&T’s DirecTV Now in the US, Canal+ in France and Salt in Switzerland.

.Last month, Canal+ struck a partnership with Apple to enable its subscribers to rent the Apple TV 4K box for €6 a month and use it as their primary TV box to receive the pay TV operator’s services n a move described by Canal+ CEO

“Significantly, Apple is following Netflix’s lead in seeking telco partnerships,” said Paolo Pescatore, vice-president of multiplay and media at CCS Insight. “This will represent a key channel for Apple as telcos do not want to invest in and subsidise costly hardware such as set top boxes. It’s a win-win for both parties.”

Other tvOS 12 features that were announced at the event in San Jose, California were: new aerial screensavers through a collaboration with the International Space Station National Lab and the Center for the Advancement of Science in Space; the ability to securely auto-fill passwords from iPhone and iPad to Apple TV to sign in to Apple TV apps; and Apple TV control support for home control systems like Control4, Crestron and Savant.

“Apple TV 4K has been a hit since its debut last fall, offering customers the largest collection of 4K HDR movies, including free 4K HDR upgrades to previously purchased movies in customers’ iTunes libraries. This fall, iTunes will be home to the largest collection of Dolby Atmos-supported movies anywhere, and these titles will also include Dolby Atmos audio for free,” said the company in a statement.

“With tvOS 12, Apple TV 4K will be the only streaming player both Dolby Vision and Dolby Atmos certified, delivering the highest quality cinematic experience of stunning 4K HDR visuals and immersive sound that flows all around in three-dimensional space.”