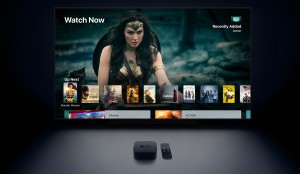 Apple has unveiled a new 4K and High Dynamic Range (HDR)-compatible Apple TV device, and announced plans to launch its TV app in Europe by the end of the year.

The fifth-generation Apple TV 4K was announced at Apple’s launch event in its new Cupertino headquarters yesterday, along with its new flagship iPhone X and updates to its iPhone and Apple Watch lines.

Apple said its latest streaming player, which was widely rumoured ahead of the event, will offer 4K HDR content from iTunes and streaming services like Netflix and Amazon Prime – which is due to launch on Apple TV later this year.

“Bring the magic of the cinema straight to your living room with the new Apple TV 4K,” said Apple’s senior vice president of internet software and services, Eddy Cue.

“Customers will love watching stunning 4K HDR movies from an impressive catalogue on iTunes, while also getting automatic upgrades of 4K HDR movies already in their iTunes library and enjoying 4K content on services like Netflix and Amazon Prime Video, coming soon.”

Apple TV 4K includes an A10X Fusion chip – the same chip that powers the iPad Pro – and will support both Dolby Vision and HDR10 content.

It is designed to output content at the highest compatible resolution, detecting whether a TV is 4K or HD capable, while Siri integration lets users search for and access content across Apple TV using their voice.

Apple said its TV app – which it launched in the US last year – now supports over 60 services and will roll out later this month in Australia and Canada, before launching in Europe.

By the end of the year the app, which offers a line-up of content across both Apple TV and iOS devices, will be available in France, Germany, Norway, Sweden and the UK.

Apple said that is also launching a dedicated Sports tab to the service in the US, which will let users track their favourite teams through on-screen notifications and team, league and event information.

Apple TV 4K will be available from September 22 and will cost US$179 for a 32Gb version or US$199 for 64Gb model in the US – a substantial premium on rival streaming players like Amazon’s Fire TV or Google’s Chromecast.

In the US a 4K and HDR-compatible Chromecast Ultra retails for US$69, while Amazon’s 4K-capable Fire TV box sells for US$89.99. However, new HDR Fire TV models are also reported to be in the works.

Apple will continue to sell the fourth generation Apple TV with 32GB memory for US$149, alongside the latest-generation version of the device.