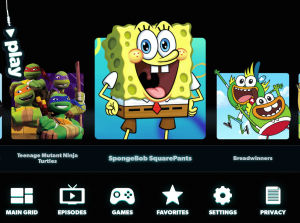 Nick Play will offer both full-length TV episodes and short form content and will include titles like The Thundermans, Hunter Street, Henry Danger, SpongeBob SquarePants and Pig, Goat, Banana, Cricket.

“We’re excited to be providing Virgin Media customers with full access to the Nick Play app in the UK as part of a continued expansion of our branded apps strategy,” said Arran Tindall, senior vice president, commercial and content distribution, for VIMN.

“The Nick Play app will give Virgin Media customers greater choice and control over what, when and where they experience their favourite Nickelodeon content.”

Virgin Media’s chief digital entertainment officer, David Bouchier, said: “The Nick Play app is an exciting addition for Virgin TV customers, offering great Nickelodeon content whenever, wherever. We want to make it easier for our customers to enjoy the TV they love and the Nick app does just that.”