Telefónica and Netflix have announced a global partnership to integrate Netflix’s service into Telefonica’s TV and video platforms in Europe and Latin America. 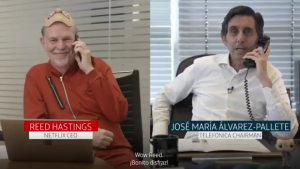 The deal was announced via a video posted to Twitter, which featured Netflix CEO Reed Hastings and Telefónica executive chairman José María Álvarez-Pallete confirming rumours of the deal and signing the contract.

“This agreement is a big step forward in Telefónica’s bet on open innovation and collaboration with leading companies around the world,” said Álvarez-Pallete in a statement.

“We want to offer our customers the most compelling video offering possible, whether it’s our own content or third-party providers. The partnership with Netflix will significantly enhance our existing multichannel video platforms.”

Hastings said that making Netflix available on Telefónica’s TV and video platforms will allow customers to watch all the content they love in one place.

“Over the next several years, our partnership with Telefónica will benefit millions of consumers who will be able to easily access their favourite Netflix shows, documentaries, stand-ups, kids content and movies across a range of Telefonica platforms.”

Telefónica’s first Netflix deployments in Latin America will be announced in the coming weeks, while a Spanish launch is currently planned for the end of 2018.

Spanish press reports claimed at beginning of the year that Telefónica was close to agreeing a deal with Netflix to integrate the SVOD service into its Movistar+ platform in Spain, with some reports anticipating a February announcement for the deal.

The confirmed agreement marks the first deal between Telefónica and Netflix, which already has distribution arrangements in place with Orange and Vodafone in the Spanish market.