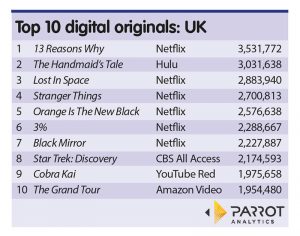 Netflix’s 13 Reasons Why, the second season of which is set to debut imminently, garnered an average of 3.532 million in-demand expressions for the week from April 30 to May 6. The Handmaid’s Tale, the first season of which was show free-to-air in the UK on Channel 4, came second in the top 10 list with 3.032 million.

Lost in Space, Stranger Things and Orange is the New Black made up the remainder of the top five, with Brazilian dystopian drama The 3% coming in at number six.

The remainder of the top 10 for last week comprised Netflix’s Black Mirror, Star Trek: Discovery, streamed on CBS All Access in the US but distributed by Netflix internationally, and Amazon’s The Grand Tour, which came in at number 10 with an average of 1.954 million in-demand expressions.