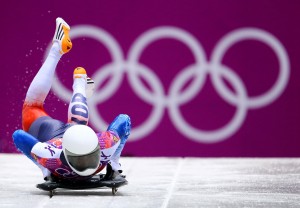 The Skeleton event at the Winter Olympics (Getty Images)

Broadcasters are making greater use of cloud and IP technology for big live events, but the need for absolute quality means that they will continue to invest significantly in on-premises infrastructure for some time to come, according to Dan Robertson, VP of Olympics information technology at NBC Olympics.

Speaking at a press event organised by Cisco on the fringes of the NBC Show in Las Vegas yesterday evening, Robertson said that NBC used cloud technology and IP delivery for “peripheral” aspects of its Winter Olympics coverage from PyeongChang, Korea in February.

Robertson said that NBC still relied on traditional technology that is shipped out to the Olympic sites in advance to ensure quality on its linear channels. Replicating the broadcast infrastructure in advance at NBC’s Stanford facility allows it to plan and connect equipment to verify how broadcast will perform from remote locations like the Korean Winter Games or the Rio de Janeiro Summer Olympic Games in 2016.

For the Korean games, NBC tried more remote production from the venues to the Olympic broadcast centre in Korea, but most of the infrastructure and equipment used was similar to what had been tried out at the Rio Games previously, said Robertson. “The timetables between the summer and winter games are short so it’s difficult to [change things], between them” he said.

Robertson said that greater confidence in IP technology would allow broadcasters to “leave stuff at home” for big international events in the future, but the need for absolute quality means there will still be a need to ship a lot of equipment to remote sites and test it fully.

Robertston said the summer events are “twice as big” as the Winter Games, meaning that IP technology will be used extensively at this event to deliver complementary coverage . “There are so many events going on that we don’t have space on our linear channels,” he said, meaning that IP will be used to stream additional content.

Robertson said that digital content consumption was growing dramatically and that this gave sports broadcasters an opportunity to engage younger audiences that are now not used to viewing linear channels.

He said that NBC Olympics was also focusing a lot of effort on using digital channels to build stories about what athletes had to do to get to the games in the first place.