IDC: VR and AR shipments to return to growth in 2018

Virtual and augmented reality headset shipments will return to growth in 2018 and reach 68.9 million units globally in 2022, according to International Data Corporation (IDC). 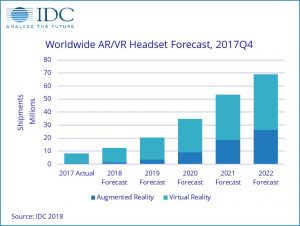 The research firm said that although the VR and AR headset market retreated in 2017 – primarily due to a decline in shipments in screenless VR viewers – it will grow by 48.5% year-on-year in 2018 to 12.4 million units.

New vendors, devices, use-cases, and business models will start to emerge with the screenless category of mobile phone viewers set to be gradually overtaken in marketshare by standalone and tethered devices, according to the report.

“While there’s no doubt that VR suffered some setbacks in 2017, companies such as Google and Facebook continue to push hard toward making the technology more consumer friendly,” said Tom Mainelli, program vice president, devices and AR/VR research.

IDC estimates that while standalone and tethered VR devices were the minority of headsets shipped in 2017, they will account for 85.7% of total shipments by 2022.

“There has been a maturation of content and delivery as top-tier content providers enter the AR and VR space,” said Jitesh Ubrani senior research analyst for IDC Mobile Device Trackers.

“Meanwhile, on the hardware side, numerous vendors are experimenting with new financing options and different revenue models to make the headsets, along with the accompanying hardware and software, more accessible to consumers and enterprises alike.”

New VR devices such as Facebook’s Oculus Go, HTC’s Vive Pro, and Lenovo’s Mirage Solo with Daydream are all due to ship in the coming months. Meanwhile, Magic Leap’s much anticipated mixed reality headset, Magic Leap One, is due to launch later this year.