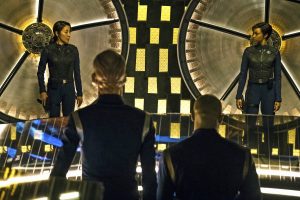 Star Trek: Discovery, the CBS All Access show that is distributed internationally by Netflix, topped Parrot Analytics’ most recent look at trending digital originals in the Irish market.

Star Trek: Discovery garnared an average of 313,215 in-demand expressions – Parrot’s measure of how well a show is doing – in Ireland for the week ending February 25. 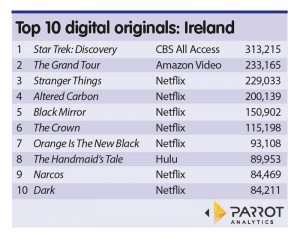 Netflix began airing the first season of Star Trek: Discovery in February, with a second season promised for next year.

Interest in the show placed it well ahead of the number two programme in the Irish list, Amazon Video’s The Grand Tour, with 233,165 expressions.

Other than The Grand Tour, Netflix shows dominated the Irish list, with Stranger Things, Altered Carbon and Black Mirror completing the top five.

Other shows in the top 10 included The Crown, Orange is The New Black, Narcos and Dark, all Netflix shows. The only other non-Netflix title was number eight placed The Handmaid’s Tale from Hulu, which was aired by public broadcaster RTÉ in Ireland.