Telefónica is to take its slate of Spanish originals to the Latin American market with the launch of the Movistar Series channel in 12 Latin American countries.

Movistar Series will offer Telefónica’s 12 original series and a selection of Latin American productions through the group’s Movistar TV and Movistar Play platforms.

The new channel will be available in Chile, Colombia, and Peru on February 15, and will be added to the Movistar offer in Argentina, Costa Rica, Ecuador, El Salvador, Guatemala, Mexico, Nicaragua, Panama, and Uruguay in the next few months, according to the telco.

In addition to the Movistar+ original series, the channel will broadcast Spanish-language content produced by third parties, successful Latin American series in different formats, as well as movies and documentaries. Each week Movistar Series will premiere episodes of nine series and five movies, according to Telefónica. 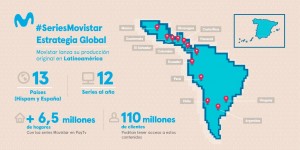 Movistar has invested €70 million in original production to date, including €10 million in La Peste.

“As a group, Telefónica is stressing its capabilities as creator of original fiction contents and its broad multi-platform scope. The operation that is being announced today will make it possible for the Movistar series to arrive to more than 13 countries in 2018, making it possible to reach 3.8 million pay TV customers in Spain and more than three million pay TV homes in [Hispanic America]. The more than 110 million Movistar mobile clients in the region must be added to this scope, all of which would also have access to these contents”, said Movistar+ president Sergio Oslé.

“We want to create benchmark television where the client has the freedom to choose. We’re going to continue working on the television model that the user wants; we have the highways and the content, and the challenge is to continue to adapt to the market, and for our clients to have the best content together with a customised, multi-platform, and an on demand experience.”

Michael Duncan, CEO of the Telefónica global consumer unit, said: “We will become a platform of platforms in Latin America, offering the best content in the market, but that will also have differential attributes that make our value proposal unique and distinguished by its quality. We believe that there is enormous potential for a platform of quality contents made in Spanish, and we want Movistar Series to become the benchmark channel for this content.”

Reports last year suggested that Telefónica was planning to leverage its investment in original series to launch an OTT offering in other European markets including the UK and Germany, where it has existing operation.

The company has previously stated its ambition to be the biggest producer of original TV content in Spanish globally.