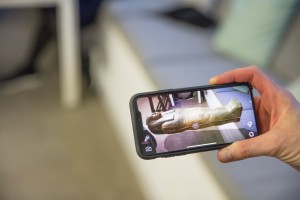 The BBC is to launch its first augmented reality app to accompany its new arts and culture series, Civilisations.

The UK public broadcaster has teamed up with over 30 museums from across the country to create content for the app.

‘Civilisations AR’ is being developed by BBC Research & Development and Nexus Studios, enabling people to explore some of the most important exhibits from UK museums in the comfort of their living rooms. The app will be available for IOS and Android from the launch of the new series.

The app will feature a ‘magic spotlight’ feature that will enable users to uncover annotations, audio and imagery that enrich the story of each exhibit.

Other features include X-ray, enabling users o see through or inside an object, such as seeing through a sarcophagus to the mummy within, Restoration, allowing users to virtually restore artefacts, and Navigation, enabling them to browse an exhibition geographically using an AR globe or via the themes of the series.

BBC R&D has separately developed a Story Explorer tool to let people discover the series and its themes in a digital way through a range of text, clips and images, and is making a range of digital tools available to partner organisations of the Civilsations Festival, a programme of events to accompany the series.

Museums, galleries and libraries will be able to use a Single Operator Mixing Application tool, built by BBC R&D, enabling them to produce live broadcasts of talks, panel discussions and Q&As to a professional broadcast quality. Another tool, Seenit, will enable museums to engage audiences by enabling them to contribute their own user-generated films on particular topics.

Other tools available to museums and other cultural organisations include EEVO, a 360° exploration tool, hosted on BBC Taster, and Canvas, a visual storytelling tool.

“The Civilisations Festival has opened BBC R&D up in a brand new way. Not only has it brought innovative digital tools and skills to hundreds of museums, galleries, libraries, archives and other arts organisations from all over the UK, it has enabled us to trial our ideas and technologies on a huge scale which is going to influence and inform our work over the coming months and years,” said Eleni Sharp, executive product manager for BBC R&D.

“The work we’ve done with these organisations will enable fans of the series new ways to engage with art and cultural artefacts from across the country. The BBC’s first ever AR app is a great example of this, offering users the ability to explore a personal, virtual exhibition of fascinating pieces whenever and wherever they want.”

The nine-part Civilisations is produced by the BBC and Nutopia in partnership with The Open University and in association with PBS.