Ampere: Netflix is yet to catch on in France

Netflix is yet to win “the hearts and minds” of people in France, with the French the least likely to take subscription video-on-demand services in a survey spanning 14 countries, according to Ampere Analysis. 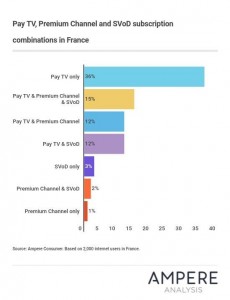 The research said that France “solidly bucks the trend” when it comes to embracing services like Netflix and Amazon Prime Video – despite having one of the highest rates of pay TV uptake in the countries polled.

French Internet users are more than twice as likely to prefer pay TV over SVOD, with 31% overall having an SVOD service compared to 76% who take a traditional pay TV offering.

Of the French homes that do take either pay TV or SVOD, only 32% subscribe to both – the lowest rate among the 14 countries.

France “continues to resist” while the US and most of Europe move towards taking SVOD as “an essential add-on to pay TV”, according to the report.

In both the US and UK, pay TV in combination with an SVOD service is now the most common way to take paid television, with fewer homes having pay TV without SVOD in these countries.

“A combination of factors has allowed French broadcasting groups to defend against the rise of subscription video-on-demand,” said Richard Broughton, director at Ampere Analysis.

Only 3.1% of French households were found to be SVOD only, compared to 14.3% in the US and 14.4% in the UK. However, in line with other countries, younger viewers were much more likely to have SVOD.