YouTube has launched the app for its US subscription service, YouTube TV, on Samsung and LG TVs. 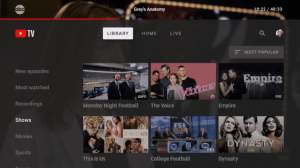 YouTube launched its new ‘lean back’ app for YouTube TV at the end of October, offering a new live guide that shows what’s airing soon, as well as a “more cinematic look”.

The app also lets users resume from where they left off on another device and allows them to control the live TV experience from the TV remote or games console control pad.

The app is already available on Android TV devices, Xbox One, Xbox One S and the new Xbox One X consoles.

YouTube launched its over-the-top TV offering in March, describing it as “live TV designed for the YouTube generation”. The live channel and cloud DVR service is now available in the US’s top 50 metro areas, covering over two-thirds of the country.

Last month Sundar Pichai, the CEO of YouTube parent company Alphabet, said that the viewers now watch more than 100 million hours of YouTube in the living room every day, up 70% compared to last year.