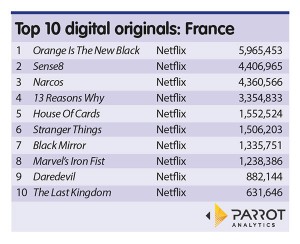 Netflix shows, led by Orange is the New Black, completely dominated the list of most in-demand US digital originals in France at the end June, according to research by Parrot Analytics.

In the week from June 26-July 2, Orange is the New Black saw an average of 5.965 million ‘demand expressions’ of this type, making the US prison drama by far the most sought-after show.

Netflix accounted for all slots in the top 10 digital originals for this week, with sci-fi show Sense8 and Pablo Escobar drama Narcos taking the number two and three slots, totalling 4.4 million and 4.36 million in-demand expressions respectively.

The other shows in the French top 10 were 13 Reasons Why, House of Cards, Stranger Things, Black Mirror, Marvel’s Iron Fist, Daredevil and The Last Kingdom.

As part of a new collaboration with Parrot Analytics, Digital TV Europe will provide regular updates on the most in-demand shows across key European markets in the coming months, based on Parrot’s unique datasets.