TDG: half of US cord cutters cancelled in the last two years 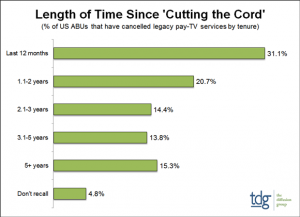 More than half of US cord-cutters cancelled their pay TV service within the last two years, according to new research by The Diffusion Group (TDG).

Overall some 52% of US cord cutters are estimated to have cancelled their pay TV service in the past year, and TDG predicts that the threat of cord-cutting will “continue to haunt operators for some time”.

The research claims that the mainstream adoption of inexpensive streaming services like Netflix and Amazon Prime has caused legacy TV subscribers to “reassess the value” of their TV services.

“TDG observed long ago that incumbents were going to have to make a choice: either resign themselves to being a ‘dumb-pipe’ provider, or invest in using IP, change the TV experience, and become the go-to source for all things video,” said TDG co-founder and principal, Michael Greeson.

“Comcast tuned into the later, investing in the hardware and software required to bring the power of IP to the legacy TV experience, and the company is now gaining video subscribers when others are reporting loses.”