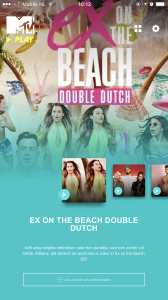 Viacom International Media Networks has launched a new MTV Play mobile app in the Netherlands and Belgium. The launch marks the first Play Plex launch for the MTV brand in Europe.

The app, part of a wider group of apps for Viacom’s core brands, gives audiences access to a video-on-demand content library and content that is exclusive on a market-by-market basis.

Today, the app will exclusively debut a full episode of the second season of the hit series, Ex on the Beach: Double Dutch, on MTV Play, six days ahead of its linear premiere. Users can also catch up on the first season of the Dutch show, as well as accessing a range of additional MTV content including some international shows.

The app is currently available free of charge on iOS and Android devices in the Belenlux countries. .

“We have had great success with our Play Plex apps around the cluster. Our Nickelodeon Play app is already active and embraced by fans around the world including in the Middle East through our partnership with OSN, and in Portugal thanks to NOS. I look forward to continuing to working with more distributors to demonstrate the value of the Play Plex apps platform and expand our multiplatform offering, especially for this generation of digitally native audiences,” said Raffaele Annecchino, president and managing director of VIMN Southern and Western Europe, Africa and Middle East.

Maurice Hols, SVP and general manager of Viacom Benelux says, “The launch of MTV Play fits in with Viacom Benelux’s strategy to bring our brands and shows to our fans wherever they are present. Television is still our most important platform, but it’s no longer the only way fans come into contact with our content. At MTV, we see that catch-up through the website and in collaboration with providers is very popular, so it’s a great opportunity to launch MTV Play now.”