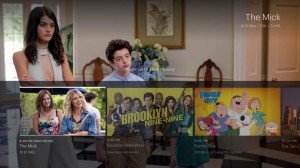 Speaking at Citi’s Internet, Media and Telecommunications Conference in Las Vegas yesterday, Hopkins said that the US service will go live in the “next few months” priced at under US$40 per-month – which will include access to Hulu’s existing US$8 subscription on-demand package.

On the content front, Hopkins confirmed that Hulu has done a deal with CBS and its related cable channels. This comes on top of existing agreements with The Walt Disney Company, 21st Century Fox and Time Warner’s Turner, which encompass a slate of channels such as ABC, ESPN, Fox Network, National Geographic.

“When you include the thousands of TV shows that we’ve got in our library – our originals, movies, kids [content] – along with this great line-up of channels that we’re amassing, I think you’ve got a very compelling offering for the consumer,” said Hopkins.

He claimed that the online TV service would include a “world-class DVR service from launch”, and that download-to-go viewing options are “on our roadmap” but wouldn’t be available at launch.

Highlighting the importance of customer experience, he said that the service was based around three design principles: an easy-to-use, intuitive design; a high level of personalisation; and a “seamless, transparent interaction” between live, on-demand and recorded content.

“When we decided about a year ago to launch a live service, I really challenged the team to go back and take a look at the eight years of learning that we have at Hulu about consumer behaviour… and come up with a new way to display and give people access to content. We didn’t feel like you could just layer on top of our existing interface live TV,” said Hopkins.

Discussing the service’s design principles he added: “We need to be able to anticipate what’s the content that you’re going to want to watch right now – based on where you are, what device you’re using, where you are and what time of day it is.

“When you think about your own experience with TV, you really don’t care if you’ve recorded it, whether it’s available via an on-demand asset, or whether it’s live. What this experience is going to do is fuse those things together so that it’s seamless for customers.”

The comments came a day ahead of the start of the Consumer Electronics Show, also in Las Vegas, where Hulu will demo the live TV service.

Hulu first revealed its live streaming plans last year and the service will go head to head with OTT competition in the US from the likes of Sling, PlayStation Vue and, in the future, Google’s rumoured Unplugged service.