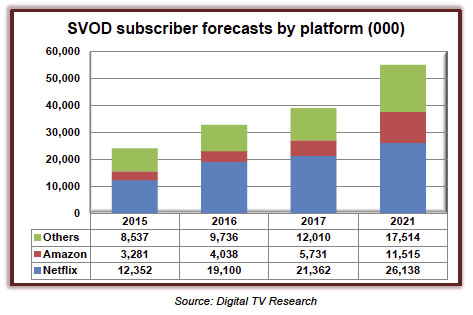 Netflix’s will become less dominant in western European SVOD over the next five years as Amazon launches across the region and takes share from the market leader, according to new research.

Digital TV Research estimates that Amazon will launch its full Prime Video streaming service in 15 western European territories by end-2017. As its regional SVOD footprint expands, its market share will increase from 14% in 2015 to 21% by 2021.

Amazon currently has its streaming service in the UK and Germany in western Europe. It was widely tipped to use the launch of mega-budget motoring series The Grand Tour as a platform for a slew of international rollouts. It is making the series available around the world but has not, however, launched the full Prime Video service globally.

New launches will see Amazon chip away at Netflix’s market leading position in western Europe, but the latter will remain the largest SVOD player by some distance.

“Netflix will remain the dominant force in Western European SVOD for the next five years,” the research house said. “Amazon Video, however, will provide a stiff challenge.”

By territory the UK is the biggest SVOD market in the region, according to Simon Murray, principal analyst at Digital TV Research. “The UK will remain market leader, but Germany will close the gap,” he said. “The UK accounted for a third of SVOD subscribers in 2015, but this proportion will fall to a quarter by 2021.”

He added: “SVOD growth will be more modest in France, Italy and Spain. In fact, the Netherlands and Sweden will have more SVOD subs than Spain in 2021, despite having much smaller populations.”