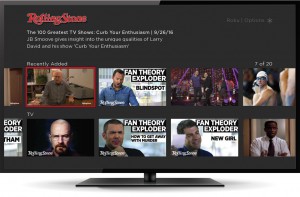 Roku has publicly launched its Roku Direct Publisher programme in the US and rolled it out internationally for the first time.

The scheme is designed to let content owners quickly and easily launch Roku streaming channels without having to manually build and code them.

Roku Direct Publisher is supported by online video platform providers like Brightcove, Kaltura and Ooyala and content owners who use Roku Direct Publisher will have their content automatically included in Roku’s universal search function, in countries where it is available, making their videos more discoverable.

“Traditionally the way that one gets their content onto a TV platform or mobile platform is to custom develop an app, or what we call a channel,” said director of product management for the Roku OS, Bill Shapiro, speaking to DTVE.

Roku will initially support an advertising-based monetisation model where it will allow the publisher to provide their own ad information ad server information and insert adverts into their content.

In the US Roku also handles inserting ads for publisher partners, and Shapiro said that this “may extend into Europe and elsewhere in the future”.

Roku previously trialled the Direct Publisher programme in beta mode in the US with partners such as Mashable and Rolling Stone. It is now publicly available for the first time in the US as well as worldwide in countries where Roku has a retail presence.

Roku currently claims to have more than 10 million monthly active accounts worldwide and sells its streaming players in the US, Canada, Mexico, the UK and France. Roku additionally runs its Roku Powered programme in Germany, Austria, Italy and Australia and is soon to launch this in the Philippines.

Roku Search includes more than 100 channels in the US and is designed to give a cross-service rundown of content, ordered by what is free or the lowest price for viewers. In the UK the search function currently covers roughly eight channels, including Now TV, Netflix and Google Play.

The news comes a week after Roku introduced five new streaming devices in the US, Canada and Mexico in what it described as the biggest player launch in the company’s history.