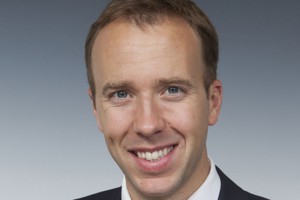 Speaking at the RTS London Conference yesterday, Hancock said that in recent years TV has grown at twice the rate of the rest of the UK economy and that annually the sector generates more than £13 billion in revenue, of which the independent production sector contributes £3 billion.

However, while British TV programmes and on-air talent are recognised throughout the world, Hancock highlighted both the challenges and opportunities around changing viewing habits – whereby 72% of Brits now regularly watch short-form videos and 4.4 million subscribe to Netflix.

“The exciting thing about now is: the toys are new again. The rules are being rewritten. This can and should be another golden age of creativity,” said Hancock.

Public service broadcasting remains “hugely values in most viewers’ lives” with 84% watching PSBs on a weekly basis, he said, claiming that the BBC’s new draft charter establishes the corporation’s “funding, its governance, its mission and purpose, its scale and its scope for the next 11 years, beyond the life of this Parliament and the next.”

“The synergy between art and technology has never been more important,” Hancock concluded. “This link: between our creative and cultural assets, and the digital platforms and technology that deliver it, is, in my profound belief, how Britain will pay her way in the twenty first century.”