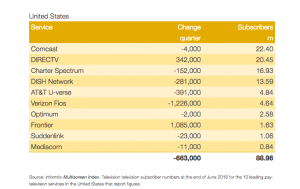 The 10 leading pay TV services in the US lost 663,000 subscribers between them in the second quarter of 2016, according to Informitv’s Multiscreen Index report.

AT&T, the largest pay TV group in the Index saw its satellite subsidiary DirecTV gain 342,000 television customers in the US, while its U-verse telco television service lost 391,000.

Meanwhile, Charter the third largest provider following the merger with Time Warner Cable and Bright House Networks, lost 152,000 TV subscribers with a total of 16.93 million in the quarter.

“DIRECTV was the only company in the top 10 to report organic subscriber growth, although that was largely at the expense of AT&T U-verse,” said Informitv analyst Sue Farrell.

“It’s been a turbulent quarter with some large losses but the real story is one of consolidation.”