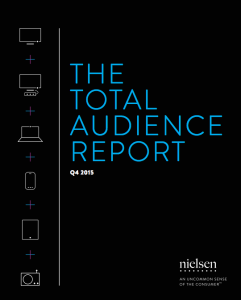 More than 40% of US millennials use a TV-connected device other than a DVR when they turn on their TV set, according to Nielsen.

The research firm’s Fourth Quarter 2015 Total Audience Report claims that people under the age of 35 are more likely than older viewers to use a TV-connected device – such as a games console or multimedia devices – on any given day.

On an average day, 56% of those aged 18-34 watched TV only via the TV, 14% watched only via a TV-connected device and 29% tuned in via both methods, according to the US research.

Millennials that don’t still live at home, but have not yet started a family, were most likely to use a TV-connected device with 53% doing so on any given day they use a TV set, said Nielsen.

The research found that the average person aged 18-34 spent two hours and 45 minutes daily watching live TV in Q4 2015, and one hour and 23 minutes using TV-connected devices – a total of four hours and 8 minutes using a TV set for any purpose.

Elsewhere, the study found that 7% of those aged 18-34 lived in broadband-only homes and use the web to watch video on TV sets. By comparison, some 12% of millennials lived in broadcast-only homes where they get TV only through an antenna. The rest subscribe to multi-channel services.

“This implies that doing without cable and solely relying on Internet-streamed video may be a life stage choice rather than a permanent decision,” said Nielsen.

Commenting on the findings of the report, Nielsen senior vice-president of audience insights, Glenn Enoch, said: “Much research and writing is done about millennials – how their technology ownership is different from older adults and how they are changing media consumption.”

“However, 18-34 year olds are not a monolithic group with a common set of technologies or behaviours. Their lives are in rapid transition as they join the workforce, move into their own homes and start families.”