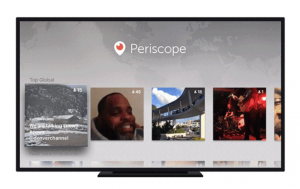 With the Apple TV app, users can stream a collection of live broadcasts from around the world, without needing to sign in. Viewers can also send ‘hearts’ if they like a video, read comments that others submit and skip to new broadcasts.

“Periscope lets you experience the world through someone else’s eyes. We use live video as a medium because when you watch events unfold live, it’s a more authentic experience,” said the firm.

“In our living rooms today, broadcast television is the closest thing we have to this. However, as live television becomes more and more produced, it can also become less genuine. This is what excites us about bringing Periscope to the Apple TV — the notion that you, your friends and family, can share what’s happening in the world right now, together.”

Periscope said that the Apple TV launch is the first iteration of this project, adding that it sees “tons of possibilities” for it and is excited by the prospect of creating new ways to interact with the broadcaster.

“We’re always working to bring new types of content and new forms of discovery to the platform,” said Persicope. “We’ve only begun to scratch the surface.”