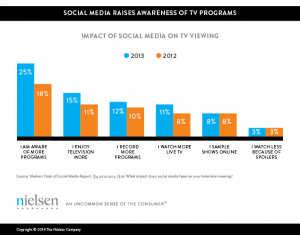 Americans are increasingly integrating TV viewing with social media behaviour according to a study by ratings agency Nielsen.

According to the study, a quarter of US TV viewers said they were more aware of TV programmes due to their social media interactions in a year-on-year comparison between 2012-13, with 15% of viewers in 2013 saying they enjoyed watching TV more when social media is involved.