One in seven TV viewers get social media recommendations 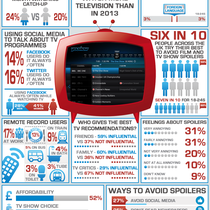 One in seven TV viewers now get recommendations about what to from social media, with the same proportion of Facebook users “always or often” using the site to discuss the shows they’re watching, according to new research.

The YouView census into national television habits for 2014, which was carried out by UK market research firm YouGov, found that 12% of TV viewers got recommendations from Facebook and 6% from Twitter.

Some 14% of Facebook users questioned said they always or often use the site to talk about the TV programme they are watching, while for Twitter it was slightly higher at 16%.

“Nationally, those on Twitter at the same time as watching TV was just 4% although 8% of 18-24s admitted to sending tweets while in front of the box. For 25-34s it was 10%. In the battle of the sexes, women were far more likely to always or often be on Facebook while watching TV – 41% of women vs 28% of men,” according to the research.

The study also found that roughly 60% of those questioned said friends and family offered the most useful TV viewing advice, compared to just 29% who said TV critics were similarly influential.

Some 59% of UK TV viewers said they now take evasive action to avoid spoilers about TV they have recorded, planned to stream later on catch-up or on demand. This rose to 68% among 18-24s.

The YouGov survey was conducted online and questioned more than 2,000 people and was carried out to mark the second birthday of UK connected TV platform, YouView.