More than half of millennial tablet owners ‘second screen’ 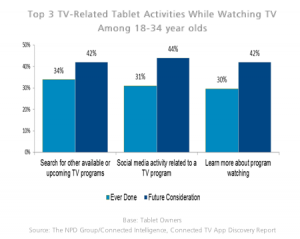 Some 56% of US tablet owners aged between 18 and 34 use their device in conjunction with TV viewing, according to new research by NPD Group.

The Connected TV App Discovery Report claimed that among the wider group of tablet owners aged 18 and over, just 41% said they use their tablet for “activities related to the TV program they are watching or for other programming related activities.”

NPD said that the top three TV-related tablet activities among millennials were: searching for shows to watch at 34%; social media engagement related to a TV program at 31%; and learning more about the program they are viewing at 30%.

Some 44% of millennial tablet owners also said they would consider using their device in the future for social media activity related to a TV program, establishing it as “the number one way this age group wants to engage while watching TV.”

“Millennials are advocates for TV apps. They seek out programming in this manner and hopefully leverage it to draw in friends and family members,” said John Buffone, executive director, NPD Connected Intelligence.

“With the proper integration tablets can be an effective tool for increasing viewer engagement among millennials and their broader social network. Social networking is a key strategic element in the evolution of the high-profile networks this generation is viewing. Children’s, family, music, and premium cable networks should invest in social media strategies that complements their programming and encourages viewers’ to spread the word about shows they are watching.”

The US networks that had most TV companion tablet usage were Nick at Nite, MTV, and Showtime, said NPD.