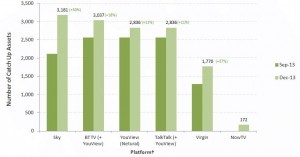 Pay TV provider Sky leads the catch-up TV market in the UK, expanding its content offering 50% quarter-over-quarter in the last three months of 2013, according to new stats from digital media consultancy, Decipher.

The VOD Audit for Q4 2013 claims that Sky grew its catch-up TV offering to 3,181 programmes in the quarter, narrowly beating BT’s YouView service by 144 shows.

Sky also beat the number of catch-up assets offered by rival pay TV providers Talk Talk and Virgin Media, which offered 2,836 and 1,770 shows respectively, according to the report.

“Interestingly, whilst there was no significant change in Virgin Media’s own on-demand offering, the Liberty Global-owned firm have recently added Netflix access to their TiVo set top boxes, giving their TV service a boost of over 12,000 episodes and movies,” said Decipher.

However, Decipher added that its collection method meant that this content isn’t included in Virgin’s overall figures.

Other findings of the quarterly report were that, of all UK services, the most VOD is available on iTunes, with 65,063 assets – which Decipher audited for the first time in Q4 2013.